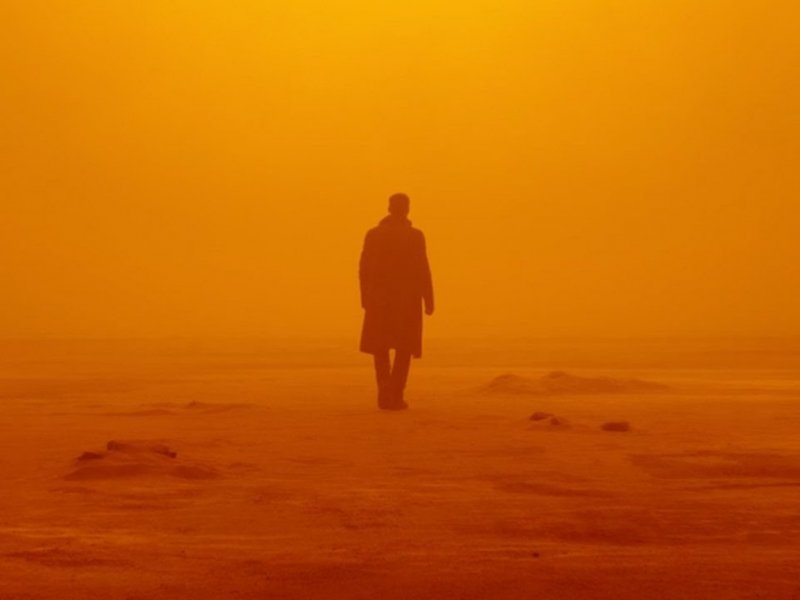 I ended up watching a lot of movies in 2017 and I ended up really enjoying the majority of them. It may not have been a good year financially for movies but it was definitely a good year for new and interesting ideas put to film as well as fresh takes on existing material. It was really tough to make my list of great movies and start eliminating them. A lot of great movies had to be left out, but here are my top favorites in no particular order:

Here is a movie I never thought would be any good. A sequel to a 30+ year old sci-fi movie that never needed a sequel to begin with. Well, some kind of miracle happened where the right people all got together to make something really special. Denis Villeneuve is a phenomenal director (Enemy, Sicario, Prisoners, Arrival), but even that wasn’t enough to temper my doubts going into this movie. Well, 2 hours and 44 minutes later I left the theatre very impressed. It was a beautiful combination of gorgeous cinematography, excellent sound design and score, and really strong performances. Just the color grading alone was excellent at setting a tone.

I think the most interesting part of Blade Runner 2049 was that you really don’t need to see original to understand or appreciate this movie. In a way it is a very standalone movie, there are a few things, like Deckard, that tie back to the original but they are mostly explained in the continuity of this movie. It stands on it’s own well and it doesn’t do anything to retcon or hurt the original which is a nice plus. If you like hard sci-fi you should really do yourself a favor and check this one out.

Baby Driver is a bit of a strange one. It’s one part heist, one part musical and one part fever dream. This one starts very strong with some fast and loud fun. It may hit a few speed bumps in the middle and have a love story that is totally insane, Baby Driver still delivers an exciting and unique experience. The story may not be perfect, but I feel like it doesn’t have to be because the movie itself feels surreal. It’s almost like doing something kind of cool and then embellishing the story every time you tell your friends.

Now I have to admit that as a car person this movie was especially fun for me just because of all the car chases and stunts. The standout being the red Subaru WRX featured during the opening, that whole sequence is worth watching over and over. If you like cars, music and fun and you have no problem letting the story be a bit wacky I think you’ll like this one.

I will admit I have never read the novel or watched the original tv mini-series, nor am I a big fan or horror (I am a big wuss and frighten easily), but It was just phenomenal. This movie is a perfect combination of coming of age, mystery and horror with just a little addition of cosmic weirdness. It has some seriously powerful scenes and it builds up some really powerful characters. You really feel for and empathize with them. Mix that in with a seriously terrifying monster that feeds on your fear and you’ve got something.

I think, for me, the most powerful thing that It does is show you that the real monsters are not shapeshifting clowns that try to eat you, although that is terrifying; but people. People like the bully who takes things too far, the parent that suffocates their child (not literally) and the sexual predators that live in our midst. I’m happy this movie did so well financially and I cannot wait for the continuation of the story.

The Disaster Artist is a weird one. In one hand I think it stands really well on it’s own and doesn’t require any previous knowledge of The Room or Tommy Wiseau. In the other hand I think it really adds to the experience to have at least seen some clips from the room beforehand. This one is a movie about the making of one of the worlds strangest movies and you can really tell it was a labour of love by the people involved. The Disaster Artist gives you a story of friendship and betrayal and a weird alien man who just wants to be famous.

Here’s how I know this movie is not just for fans of The Room, I went to see Wonder (this movie is a rollercoaster of emotions) with my Mom and when we were leaving we saw a poster for The Disaster Artist and she told me about seeing the trailer for it and that she was really interested in seeing it. So I think, even if you haven’t seen The Room, that you should go check this one out. It’s fun, and funny and a great behind the scenes into the world of Tommy Wiseau.

Split is a return to form for M. Night Shyamalan. After making a few terrible movies (The Happening, The Last Airbender, After Earth, etc), we see something seriously good with Split. This movie had me on the edge of my seat the entire time. I was just clenching my body the whole time waiting to see what would happen next. That, to me, is the sign of a good thriller. James McAvoy’s multiple personalitied character Kevin is incredible. You could actually tell which character he was, even though he still looked the same, which really blew me away. Anya Taylor-Joy’s character was also very believable and I felt so afraid for her the whole time.

I’m glad M. Night got his groove back with this one. I’m excited to see where he takes this world and these characters. If you are a fan of watching a seemingly helpless character in situations that seem un-winnable that just keep you on the edge of your seat you should watch this one. I promise it is nothing like some of M. Night’s previous works. It’s fresh and genuinely thrilling.

A Cure for Wellness

Now here is a really spooky one. A Cure for Wellness is all about atmosphere and mystery. Let’s start with atmosphere. This movie is eerie, spooky and surreal in just the right ways. It’s slow and building. There are layers to this movie and you slowly peel them away as it goes along. Now I found the mystery to be the most fun. There is something weird going on at this wellness centre and you can tell right away. What really drew me in was this feeling of solving the mystery on your own, but at the same pace as the protagonist.

Now this movie is not for everyone, and that’s ok. It’s slow and tense, sometimes with an unsatisfying relief of that tension but it all comes together. If you are a fan of weirdness, then this is for you because it is weird. If you are a fan of mystery I think you’ll like this too, I really felt like I was solving this mystery and that was fun.

This one is the most fresh in my mind because it just came out. Bright is a combination I never expected to see in a movie. It’s fantasy characters like elves, orcs, fairies, etc living in a near future modern day L.A. where magic exists but it’s basically a myth. Now you may think that having all those different races living together there would probably be racism among them. And yes there is, but it works and doesn’t feel too heavy handed. It really feels like a fairy tale way to talk about the world we live in today.

Bright is a fun buddy cop movies with crazy fantasy elements in a not too far off modern day world. It has a unique twist where the buddy cops are different races, Human and Orc. Now this movie is not perfect, there are stakes that are too high and don’t have great payoff. But where this movie really shines is in it’s character and world building. I would love to see more from this universe, maybe from another country and from a different set of characters.

Personal Shopper is a really cool take on a ghost story. It starts with Kristen Stewart spending the night in a spooky house because she and her brother made a pact that when one died they would haunt the other. So, she is trying to get some kind of contact from her dead brother. Now what’s really interesting about this is take on the ghost story is that you are put in this character’s shoes and she doesn’t really believe in ghosts. Things happen to her and she isn’t sure how to explain them but often times they are not really supernatural.

This is my art film on this list and it really ins’t for everyone. It’s very slow and without a ton of dialogue. It leaves a lot open to interpretation, but that’s what I love about it. You are never really sure if there is anything supernatural happening at all. But it makes you think and it makes you want to talk about what you think, and I think that is the best thing a movie can do.

These were movies I really liked but didn’t really have room for on this list. I would recommend watching any of these: