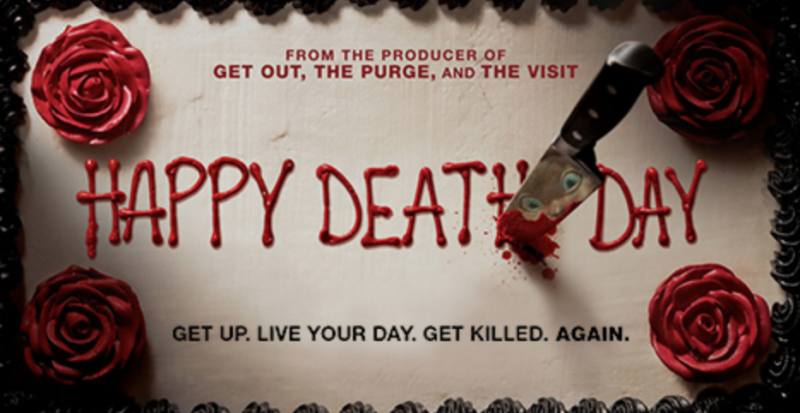 Happy Death Day is a Slasher film about a university student, Theresa "Tree" Gelbman, who wakes up on her birthday in the dorm room of a classmate, Carter Davis, after a drunken party night. She goes through the day being just an awful and unlikable person only to be killed at night by a hooded figure wearing the mask of their school mascot, which is a horrible cartoonish baby face. She then wakes up in the same dorm room back at the beginning of her birthday and must re-live the day over and over as she continues to be killed every night. Think of it as a mix of groundhog day and a typical slasher film. In fact the characters even mention this later in the movie.

This movie was a joy to watch. It had lots of fun camera work including some really great hallway chase scenes and some "he's right behind you" jump scares, even a really cool pan up to the top of the inside of a bell tower. Just all the things you want in a slasher film. But what really did a great job at tying it together was the color grading. It was done in a way that really drove home the light-hearted feeling the movie has. It's more a fun love letter to slashers than a straight up horror movie and I really enjoyed that about it.

I am giving Happy Death Day a 2/3 because I think it does a really great job keeping you visually interested and bringing some really great camerawork to the table. I mentioned above about how I really thought the color grading helped set the mood of the movie as more of a fun slasher than a straight up horror and I found that to really be one of the movies pros.

Happy Death Day has a great score that accompanies the movie. It has some typical horror movie sound cues but they mix it up with more upbeat and energetic music. Again with the color grading setting the tone, I think the music really nails the tone of the movie home. It's a fun slasher and it wants you to know it's fun.

I'm going to give it a 2/3 here because as much as I love the music setting the tone it's nothing extraordinary that will stick in your memory. Even as I am writing this review only a week or so after watching the movie I can't quite remember a lot of how the movie sounded and for this I think a 2/3 is fair. It's great but not super memorable.

This movie is very much a story of growing and learning from your mistakes. Very much like in Groundhog Day, the main character is not super friendly or likeable at first. In fact Tree is kind of awful and mean to everyone around her. After she gets killed a few times and realizes she is stuck in this time loop she starts to realize that maybe she doesn't treat everyone so well and maybe she should try to be a bit nicer. There is a very powerful scene where you can see that she has finally learned to care about other people and she makes a choice that she would never have made before to save someone else's life.

I really liked the two main actors they picked for this movie. Jessica Rothe as Tree and Israel Broussard as Carter. They both do a great job convincing you that they are indeed real college kids, Tree as the snobby stuck up sorority girl and Carter as the nerdy and kept to himself kid just trying to be nice. The story of learning about yourself and changing for the better is all wrapped up in a nice slasher / time travel movie and I really enjoyed it. For that i'll give it a 2/3. This is another one where I would definitely give it a half point if I could and make it a 2.5, I really think it's just a few steps away from being perfect.

If you are looking for a fun slasher flick to give you some good scares but even better laughs this might be the right movie for you. Happy Death Day is a lot of fun and it's got a good amount of mystery, slasher elements and a kind of goofy happy vibe. I really recommend anyone to check this out. I really don't think you will be disappointed with this movie.