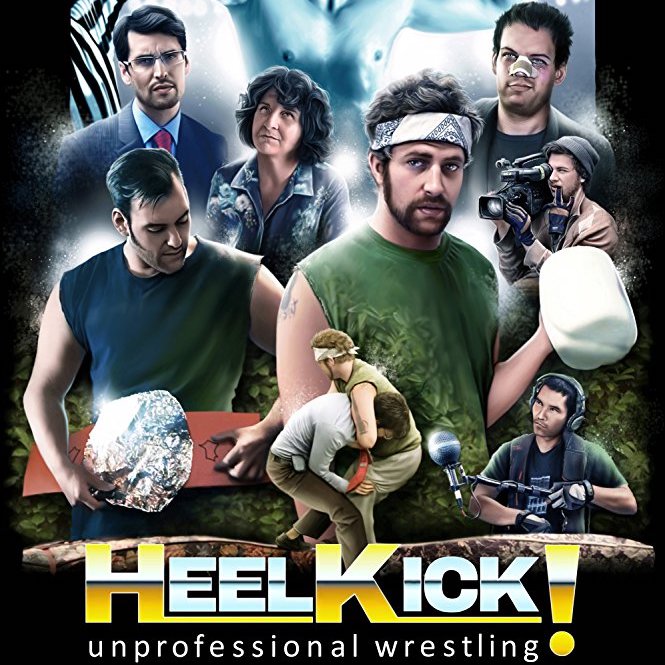 Heel Kick! is a Canadian indie film from British Columbia. In this mockumentary style film we follow two burnout friends, Reggie (played by Danny Mac) and Maurice (played by Chris Wilcox), who believe they can make it as pro wrestlers. The big problem is they are actually terrible and may not have what it takes to go pro.

The faux documentary style of film making can go one of two ways: it can feel like a real documentary and be actually believable even with the somewhat silly or comical nature of the characters, or it can be just be another movie that has a few single camera scenes that tries to be documentary. This is the big difference between what makes old seasons of Trailer Park Boys feel so real vs the Netflix seasons and how they just feel like another sitcom or something. I'm happy to say that Heel Kick! does the former and does such a great job with the documentary style that it legitimately feels real.

Another really great visual part of this movie is that they do all their own stunts and it really shows. Especially with some of the more intense wrestling scenes, like a jump off the roof onto a homemade wrestling ring. Another great mention is a scene where one character drinks raw eggs. These scenes really add to the real feeling of this movie. You really feel like the characters are real and that what you are watching is real.

I'm giving Heel Kick! a 3 for the see score because I really feel like they put in serious effort to make the documentary style feel legitimate and real. I believe they really took advantage of the tools they had to make this movie look and feel the way it does.

Heel Kick! being a mockumentary doesn't really have a soundtrack but there a few scenes with some well placed music. The audio for the movie fits the style well but doesn't really do anything above and beyond here. Everything is good and I give it a 2 because of that. Maybe I'm being unfair because I don't really even know how this style movie could actually push that boundary. But a 2 is still a good score and there is nothing wrong with that.

The characters in this movie are well written and well acted. They feel genuine and real. You know people like these characters and you can relate to them. The acting is what really sells it. It just feels so real and I love that. It really reminds me of old Trailer Park Boys. You have met or maybe even grew up with people just like these characters. They may be dumb or silly or even just ridiculous but they are believable.

This is the best part of the movie and I think it really deserves a score of 3. I keep saying it feels real and I really wanna push that point home. These characters are goofy and dumb but they are so genuine and you just want them to win. You root for them and you believe in their story. It's really something special.

In conclusion I think you should give this movie a shot. It's about backyard wrestlers trying to go pro but you really don't need to be a fan of wrestling to enjoy this movie, I certainly am not a big wrestling fan. If you liked old school Trailer Park Boys, or even just that style of mockumentary film making you will likely really like this movie and have a lot of laughs.