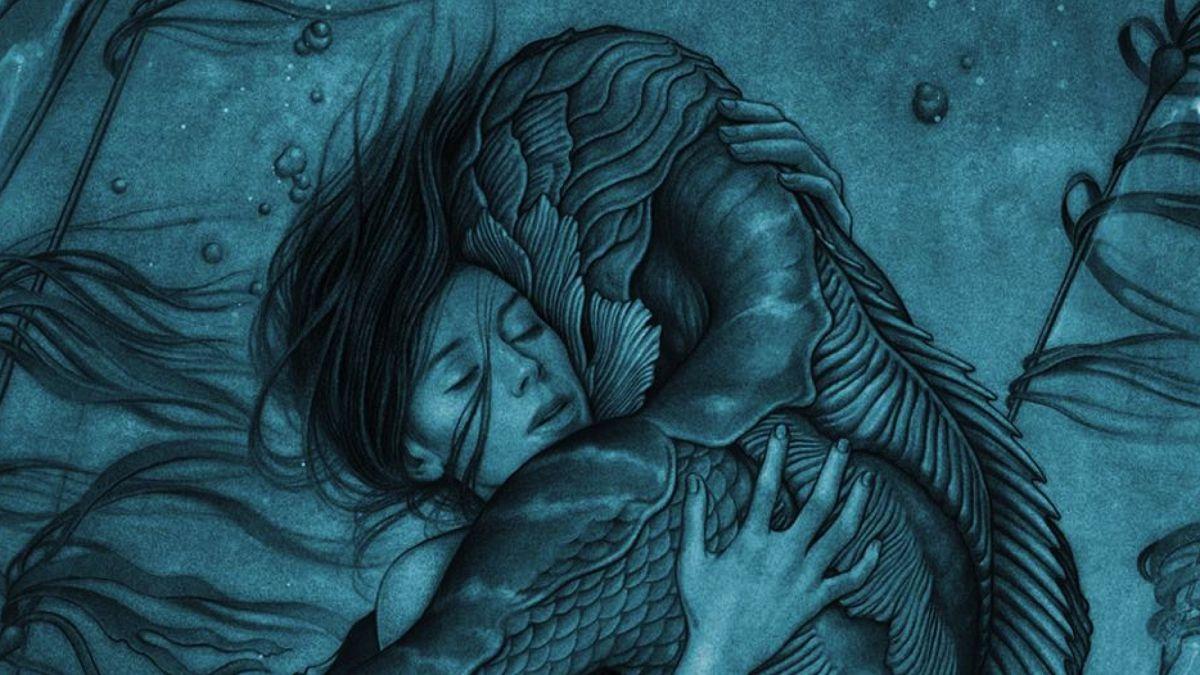 The Shape of Water is Guillermo's dark twist on the classic beauty and the beast style fairy tale. The film takes place in America in the 1960s and follows a mute custodian named Elisa (played by Sally Hawkins). She works at a high security government facility that brings in an amphibious humanoid creature to study. The creature is brought in by a Colonel Richard Strickland (played by a positively menacing Michael Shannon) who only wants to exploit the creature for it's possible advantages in the Space Race. Elisa and the creature form a strong bond, due to their shared inability to communicate like everyone else, and she must try to save it from being tortured and experimented on.

Guillermo del Toro is a master of creating beautiful and spooky visuals. He fills every single scene with just tons and tons of character. Our main character Lisa lives in an apartment above a movie theatre and her apartment is just so unique and interesting filled with all sorts of tiny details that really add to the character. All the locations are painstakingly designed to look as true to life as possible for the era. Every nook and cranny in every room is filled with tiny details you may never even notice, but they are all there for a reason and add to the feel of the movie.

Now, set design and props aside, this movie does some very interesting things with all the camera work. There are so many scenes that are unexpected and powerful. One in particular is of Elisa and the creature dancing in a daydream scene. The scene is shot like one of the old movies Elisa watches with her next door neighbour. This scene is shot in black and white and is so out of this world due to it being a daydream.

One last thing I want to give praise to is the awesome practical effects of the creature design. The amphibious humanoid creature is played by Doug Jones and is mostly a real suit with some cg added here and there depending on the scene. It looks very real and Doug Jones does an incredible job bringing it to life

I'm giving The Shape of Water a perfect See score of 3 and it really deserves it. This movie does so much with what you see that it could probably be a silent film just due to all the character, emotion and detail injected into every scene. On top of that, every shot of this movie is just put together with so much care and thought. It really is a visual masterpiece.

The soundtrack for this movie is sublime. It's filled with very subtle and beautiful french music that really sets a romantic and airy vibe. It might seem strange that a movie set in America in the 60s would have a very obviously romantic french soundtrack, but it really fits with the aesthetic of this movie. It adds so much to the tone and feeling. I really wish I had more of an ability to put to words what I feel about music. The soundtrack in this movie is perfect and very memorable and for that I think it deserves a perfect 3.

Here is the big one, the Feel section. The Shape of Water is a dark fantasy / romance film and it has a very powerful message. The movie is about how even though you may feel incomplete or imperfect and alone you are not alone. Elisa is a mute but she is not deaf, she communicates with sign language. She is about 40 and not married or in a relationship and she lives alone. Her neighbour Giles (played just perfectly by Richard Jenkins) is an even older artist who just can't seem to get any work now that photography is taking over. He is also not married and lives alone, and on top of that is gay. The creature may be humanoid in appearance but is totally alien in it's captive environment. It cannot speak or communicate and is the only one of it's kind.

Now these characters all feel different and alone and incomplete. They are all basically the only one of their kind in this small town. But they learn from each other that being different does not make you weak, and that you are never really alone. The love story between the creature and Elisa is so powerful and emotional even though neither of them can speak. They convey so much emotion through their movement and facial expressions and later even sign language and music.

Now in your average fairy tale the beast is actually just a man with a spell over him and when the beauty does something to lift the spell they will live happily ever after as normal people. The Shape of Water flips this on it's head with a creature that really is just a creature and is not human in any way and with a beauty that is not normal or even typically young or conventionally beautiful. This movie does everything right and makes you really care the whole time about these characters and their connections with each other. It deserves a perfect score of 3.

The Shape of Water is a masterpiece. It deserves to be seen. Everything that makes a movie good is here. The visuals are stunning and full of depth and detail. The score is perfect for the visuals. It conveys the aesthetic and theme of the movie so well and on top of all that this movie has characters that you just love. Characters that you want to succeed and be happy. The movie makes you feel from beginning to end. Even if you aren't interested in this movie you should really do yourself a favor and watch it. I don't think you will be disappointed.